You are in: Home / Museums / Puglia

“Built on troubled waters”, as it was described by the Latin poet Horace at the end of the 1st century BC, today the ancient city of Gnathia has been brought back to life at the National Museum and Archaeological Park.

This is the most extensive example in Puglia of the cities of the Roman period and late antiquity, preserved a few kilometres from the trulli of Alberobello and the “white city” of Ostuni, on the road connecting Bari and Brindisi.

The archaeological site is near Fasano in the midst of ancient farms and olive groves, and looks out on a part of the Adriatic that was awarded a Blue Flag, once again, in 2017. It testifies to the history of Egnatia, an active commercial centre of the ancient world where the earliest settlement arose in the 15th century BC (the Bronze Age) and was inhabited by the Messapians from the 8th century BC, later becoming part of the Roman Republic, and then the Empire, until it declined in the Middle Ages. 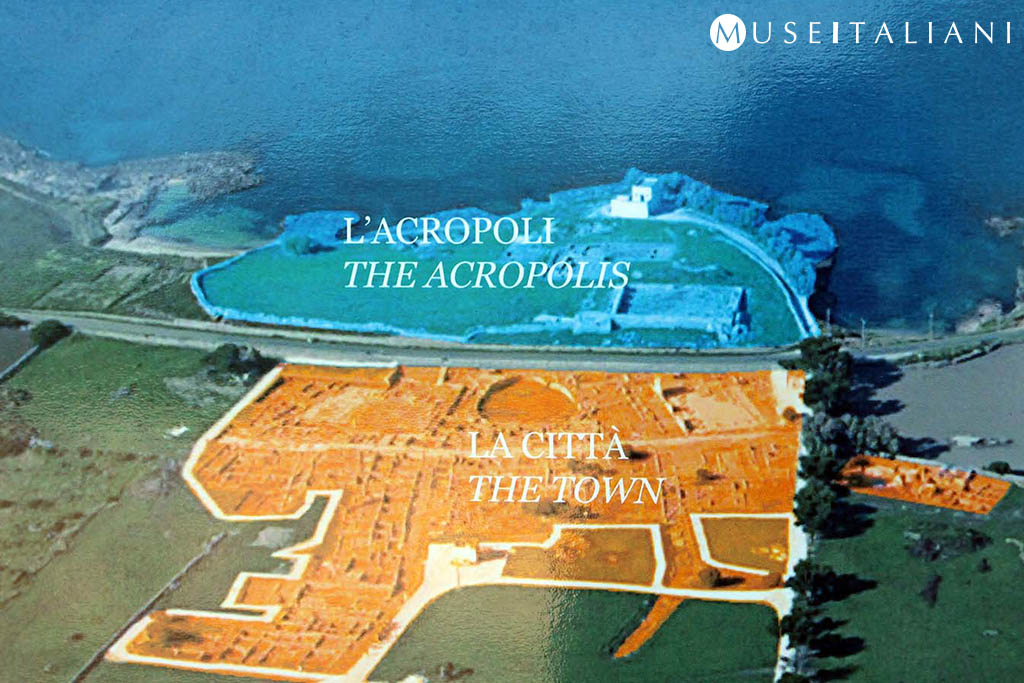 The origin of the excavations

During the nineteenth century the remains of Egnatia were systematically plundered by Polish and French officers and later by local agricultural labourers, which led to the dispersal of a large number of archaeological finds, mainly taken from the apparatus of the rich Messapian tombs. 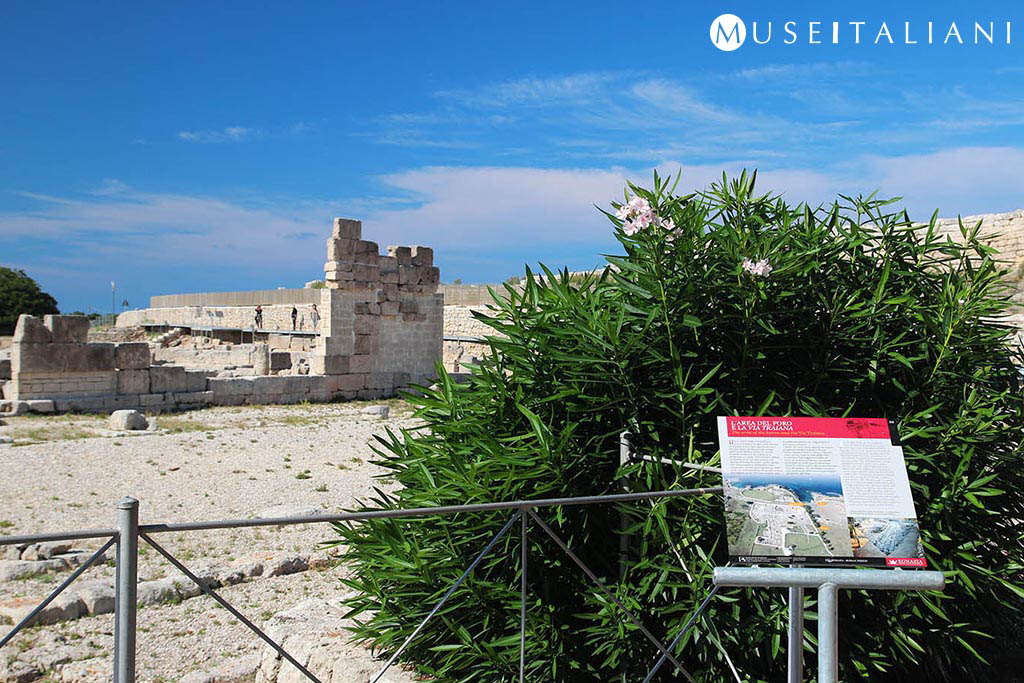 Correct archaeological investigation only began in 1912 and, with various interruptions, has continued until the present. Today the site, with its 15 acres of archaeological park and 1,200 sq.m of exhibition area within the museum, is not merely a site of excavations and archaeological remains, but is a complete ancient city in the open air.

The most ancient traces of human presence in Egnatia date from the Middle Bronze Age and were found in the area of the acropolis. The buildings for worship, including the imposing Sanctuary of Trajan, which was constructed in Roman times (2nd century AD) and is dedicated to Venus, are evidence that life continued here well into later epochs. 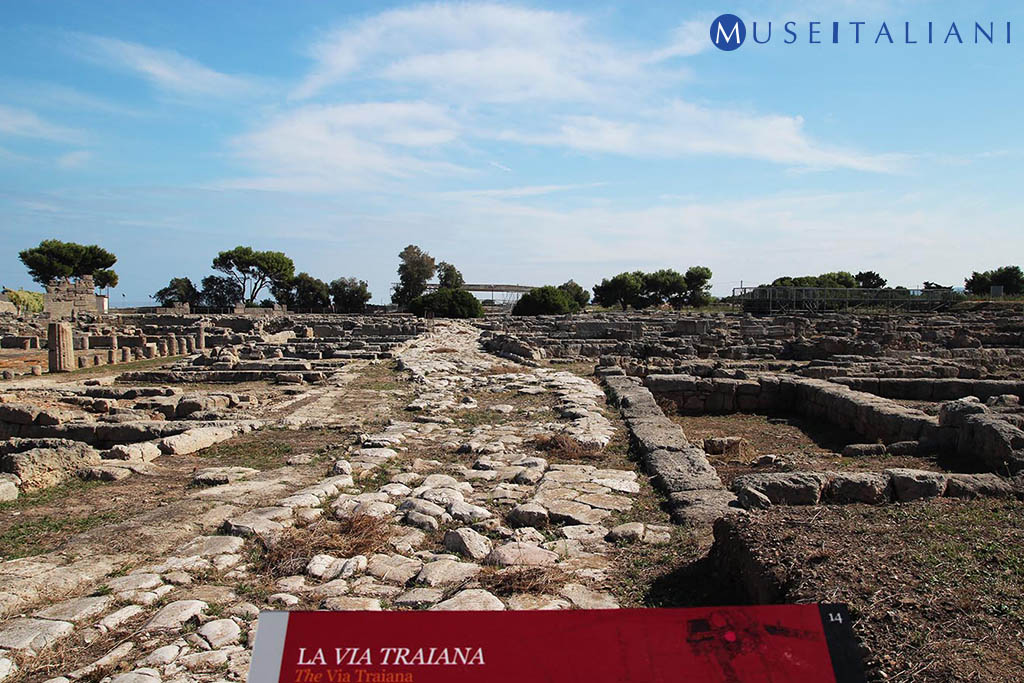 The remains of the Trajan Way (via Traiana), which was built by the Emperor Trajan between 108 and 110 AD as a variant of the Appian Way (via Appia) connecting Benevento (Beneventum) to Brindisi (Brundisium), mark an ideal dividing line between the public buildings and the residential and artisan neighbourhoods of the Roman city. 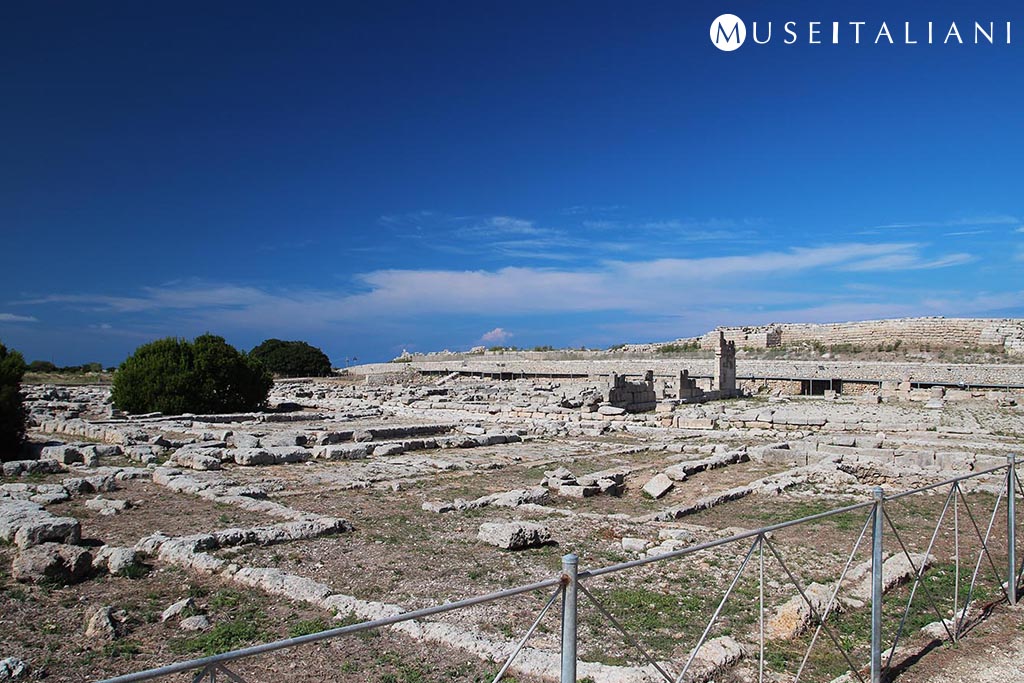 The Messapian tombs that were discovered in the necropolis often have pictorial decorations that provide us with information about the culture of the afterlife and the beliefs about it that were widespread between the 4th and 2nd centuries BC. A high standard of living is evidenced by the frescoes and the numerous chamber tombs – single underground rooms of great size completely excavated out of the stone – and semi-chamber tombs of smaller size. This construction of monumental tombs of familial character is evidence of the presence of an emerging aristocratic class. 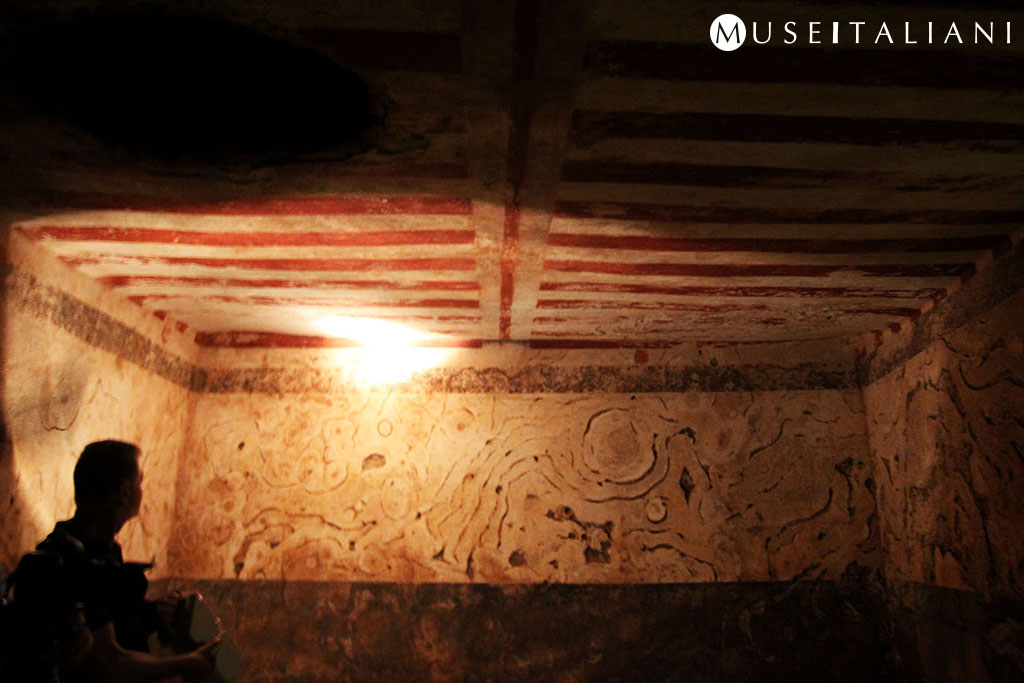 The Tomb of the Pomegranates

When the foundations for the museum were being constructed in 1971 great interest was aroused by the discovery of one of these chamber tombs, known as the Tomb of the Pomegranates. Completely excavated from the rock, it is accessed via a flight of steps carved from the living stone and leading to a vestibule. It has an extraordinary portal consisting of two monolithic doors with a recessed handle, and still works perfectly.

This hypogeum took its name from the pomegranates, symbol of the afterlife, frescoed in the upper part of the walls of the tomb. Lower down are plant motifs with ivy branches interlaced by palmettes. The decoration of the ceiling reproduces the typical architecture of Roman dwellings, in the red bands that simulate the timber beams and rafters of a pitched roof.

Currently the Tomb of the Pomegranates is only open on special occasions for public guided tours. It is the subject of a restoration project that may be funded by Art Bonus, a tax incentive for businesses and individuals wishing to support cultural heritage.

The museum was built in the 1970s to bring together the now-copious evidence found in the excavations at Egnatia and put it on public display. It is subdivided into chronological sections documenting the history of the settlement from its origins to its decline. 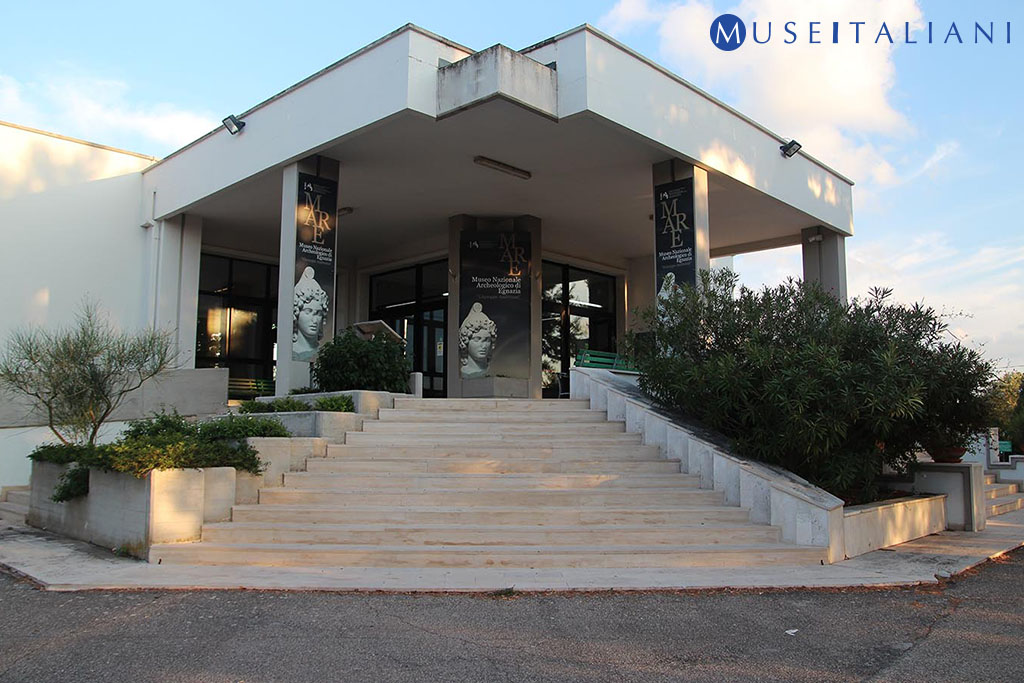 The specimens of the symbolic trozzella jars of Messapic culture, which have roundels known as “trozze” applied to their handles, are of particular interest. As well as the important Apulian red-figure pottery there are numerous vessels decorated in the “Gnathian style”, a black varnish with superimposed decoration in white and yellow; these are found widely throughout Puglia.

Like the great variety of artefacts of Italic, African, and Oriental origin, these amphorae testify to the importance of trade, and to its increase following construction of the harbour and the Trajan Way. 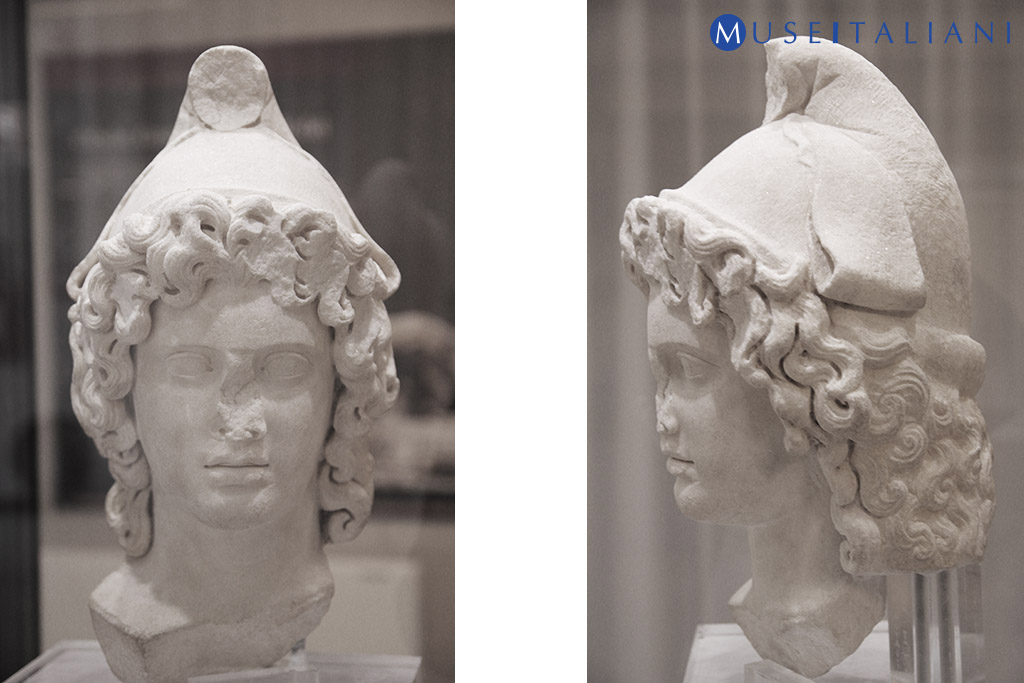 The splendid head of Attis with the typical Phrygian cap, sculpted from valuable white marble and belonging to a statue of the Hadrian era, is a testimony to the spread of the cult, which was of oriental origin, of the Great Mother of the Cybelean Gods.

The Museum, named in honour of Giuseppe Andreassi, museum director, supervisor of the archaeological site from 1976 to 1985 and Chief Apulian Archaeologist from 1990 to 2009, stands outside the town walls of ancient Gnathia, in the area of the Messapian necropolis.The city, mentioned by classic authors for its privileged geographic location, was a strategic commercial port connecting East and West. The first settlement dates back to the 16th century BC and survived until the Iron Age, when the entire region of Apulia was inhabited by the Iapygians. Around the end of the 6th century BC, Egnazia was a Messapian settlement. Starting from the 3rd century BC, with the Roman presence in the region, the city underwent a transformation and in the 1st century BC it acquired municipal status, growing in importance thanks to its port and the Via Traiana (Trajan Way). From the 6th century AD, the lower settlement became increasingly abandoned, as its inhabitants moved to the Acropolis until the 13th century.The massive defence walls of Egnazia and nearby necropolises–containing cist graves, semi-chamber and monumental chamber tombs–are all vestiges of the Messapian age The remains of the Roman city include parts of the Via Traiana, Basilica Civile (Civic Basilica) with the hall of the Three Graces, the sacellum of Eastern deities, the square with porticoes, the cryptoportico and the thermal baths. Among the Christian buildings, erected between the 4th and the 6th centuries, the Basilica Episcopale (Bishops’ Basilica) with the baptistry and the Basilica Meridionale (Southern Basilica), which originally featured mosaic floors.Built in 1975 outside the city walls of ancient Gnathia, on the edge of the western necropolis, since 1981 the Museum has welcomed a series of temporary exhibitions, whilst also housing the permanent exhibition ‘Egnazia, la storia e i monumenti’ (“Egnazia, its history and monuments”). The current set-up, placed on a raised floor which also accommodates the institution’s administrative offices, was inaugurated in July 2013. The exhibition, divided into seven sections, tells the events that marked archaeological research in Egnazia and the historic development of the site from the 16th century BC to the 13th century AD, when the area was abandoned. Artefacts and visuals illustrate the characteristics of the first hut settlement in the Bronze Age, the influence of the Iapygian and Messapian cultures, the Roman era and the Early Christian period, when the city became a bishopric. The last section comprises evidence of Longobard presence and the last traces of human activity in the area. The relics were found during excavations in the settlement and in the burial sites of Egnazia and the surrounding area.The basement of the museum contains a 4th century BC Messapian tomb, the so-called Tomba delle Melagrane.