You are in: Home / Museums / Emilia-Romagna

The Gallery houses an extraordinary collection that unveils the taste and passion for the arts of the Este dynasty.

Modena, situated in the heart of Emilia Romagna, is home to one of the most important museums in Italy. In addition to its artistic treasures, Modena is known for its great tradition of fine food and wine and for being the home of Ferrari, a car maker that arouses the passions of sports enthusiasts all over the world.

In the historic centre of Modena, which was the Capital of the Duchy of the Este from 1598 to 1859, is the admirable Piazza Grande with the Cathedral, which one of the greatest expressions of the Romanesque in Europe, and the Ghirlandina Belltower, recognised in 1997 as UNESCO World Heritage.

From Ferrara to Modena: the legacy of the Este family

The ancient Este dynasty rose to the rank of Ducal in the late fifteenth century, when thanks to that family’s patronage and taste, Ferrara became one of the most lively cultural centres of the time. The House of Este maintained its supremacy over Ferrara until 12 January 1598 when under the Convention of Faenza, Ferrara was devolved to the Papal State.

Alfonso II’s heir-designate, his nephew Cesare, left Ferrara and went to Modena with his family, taking with him part of his collection; other works were placed in Palazzo dei Diamanti (today the Pinacoteca nazionale di Ferrara). In Modena, the collection ended up in the sumptuous Palazzo Ducale, built in 1630 at the behest of Francesco I d’ Este (1629-1658), who was one of the most important patrons of the Baroque period.

Following the unification of Italy, the Este collections were moved about and tampered with until Palazzo Ducale was abandoned in 1894 and the Reale Galleria estense was reopened to the public in Palazzo dei Musei.

Following the reform of 2014, the Gallerie estensi acquired the status of an autonomous museum as part of a new complex of museums that also includes the Biblioteca estense universitaria, the Museo Lapidario estense, the Palazzo ducale di Sassuolo, and the Pinacoteca nazionale di Ferrara.

The collection of the Galleria estense

Although a number of significant losses resulted from the relocation and from sales of some of the works, in 1624 the collection was enlarged not only by the bequest left by Cardinal Alessandro d’Este, but above all thanks to the ambitious project of Francesco I, who caused new works to be brought from Ferrara and also purchased important masterpieces by Correggio, Veronese, Guercino and other major artists.

To these were added the portrait of Francesco that he commissioned from Velázquez, and the very fine bust of him by Gian Lorenzo Bernini: a work that is the symbol of the Gallery.

Today the Este collections include a richly endowed picture gallery of works dating from the 14th to the 18th centuries, including a group dedicated to painting in the Po Valley.

The exhibition “From Correggio to Guercino. Masterpieces on paper from the collection of the Dukes of Este” opens on 17 February with a fresh look at the style, technique and compositional secrets of the great 16th and 17th century masters, as seen in a selection of drawings from the store-rooms of the Gallery.

Wunderkammer: the wonders of the Este

The taste of the Dukes of Este is reflected in the decorative arts that make up the collection in the “Cabinet of Curiosities” (Wunderkammer) and is rich in majolica, ivories, and musical instruments; in particular, Francesco II acquired rare instruments made from marble and wood. 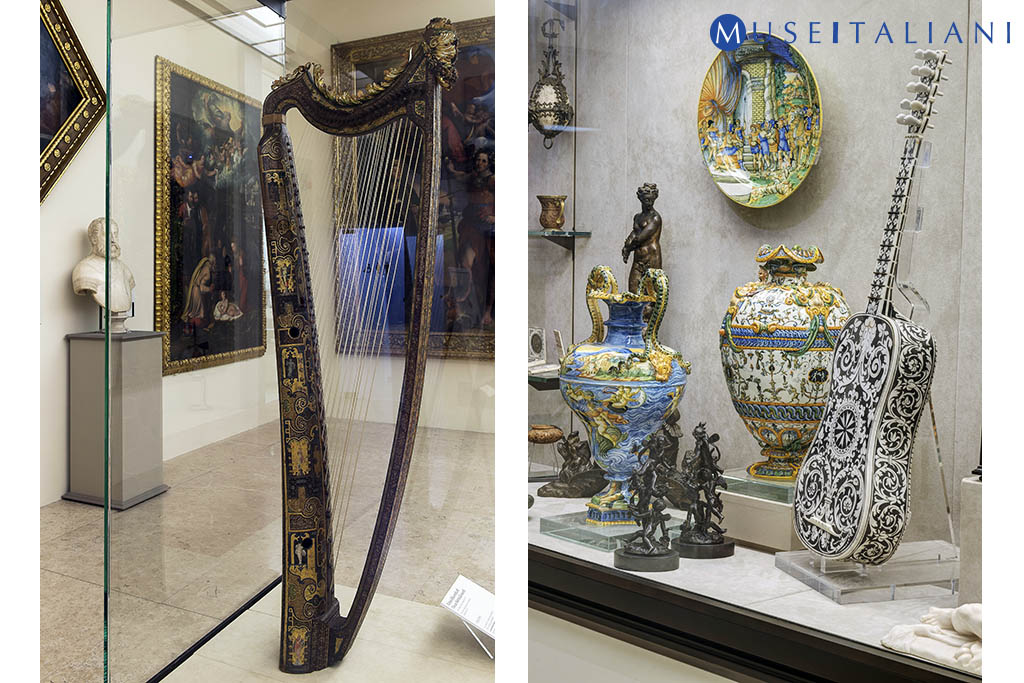 Among these are a violin and cello made by the carver, decorator, calligrapher and musician Domenico Galli in collaboration with an unknown luthier. The violin has a small medallion at the top of the fingerboard and an inscription with the artist’s dedication to the Duke. The cello also has a similar dedication and was presented to Francesco along with a cycle of twelve specially composed sonatas. This instrument is made precious by very elaborate carvings that refer symbolically to the Este family: the hedgehog with the dragon and, on the body, the allegory of the Prince of Wales, the son of James Stuart and Maria Beatrice d’ Este (Mary of Modena).

Remaining in the musical field, the collection in the Biblioteca Estense Universitaria di Modena includes codices and manuscripts of secular, sacred and polyphonic music that were produced by the circle of Prince Alfonso II, and can be consulted. The Renaissance part of this collection refers to these activities in Ferrara, whilst the documents relating to the activities in Modena over the next two centuries, promoted by Francesco II, go beyond court music and are enriched by operatic music from the Venetian world. There is evidence in the collection to show that the Duke was also interested in cantatas from the Roman environment.

In collaboration with the University of Modena and supported by the Cassa di Risparmio di Modena, the Gallerie Estensi have announced three research grants with a duration of two years, for projects relating to three nuclei of the manuscript collections in the Biblioteca Estense Universitaria (maps, musical manuscripts, and the Archivio Muratoriano). The young researchers on the Digital Humanities programme are given the task of studying and cataloguing these collections and putting them online with relational databases, as the key to making the documents known to a wider public. For further information: bandi.miur.it

Established in 1854 by Francesco V d'Este of Austria and moved to its present site of the Palace Museum, (Palazzo dei Musei) in 1894, the Estense Gallery includes four rooms and sixteen exhibition rooms which are dedicated to the remarkable artistic heritage collected by the Dukes of Este since the glorious dominion of Ferrara. Aimed towards aristocratic collectors with many interests, the Estense collection includes a rich collection of paintings, a number of which are valuable and date back to the fourteenth to eighteenth centuries. It also includes some works which were dedicated to the Pittura Padana, as well as diverse sculptures in marble and terracotta, a large collection of objects which were part of the sumptuous wardrobe of the Grand Duke, along with several special collections such as drawings, bronzes, majolica, medals, ivories and musical instruments. Among the art works are the Pietà reported by Cima da Conegliano, the Madonna and Child by Correggio, the Portrait of Francesco I d'Este by Velazquez, Il Trittico of El Greco, the marble bust of Francesco I d'Este by Bernini and the Crucifix by Guido Reni.