You are in: Home / Museums / Emilia-Romagna

In the halls of Palazzo Costabili, jewellery, vases, ornaments and utensils of the Hellenic and Etruscan period, from more than 4.000 tombs, are on display representing the ancient city of Spina. 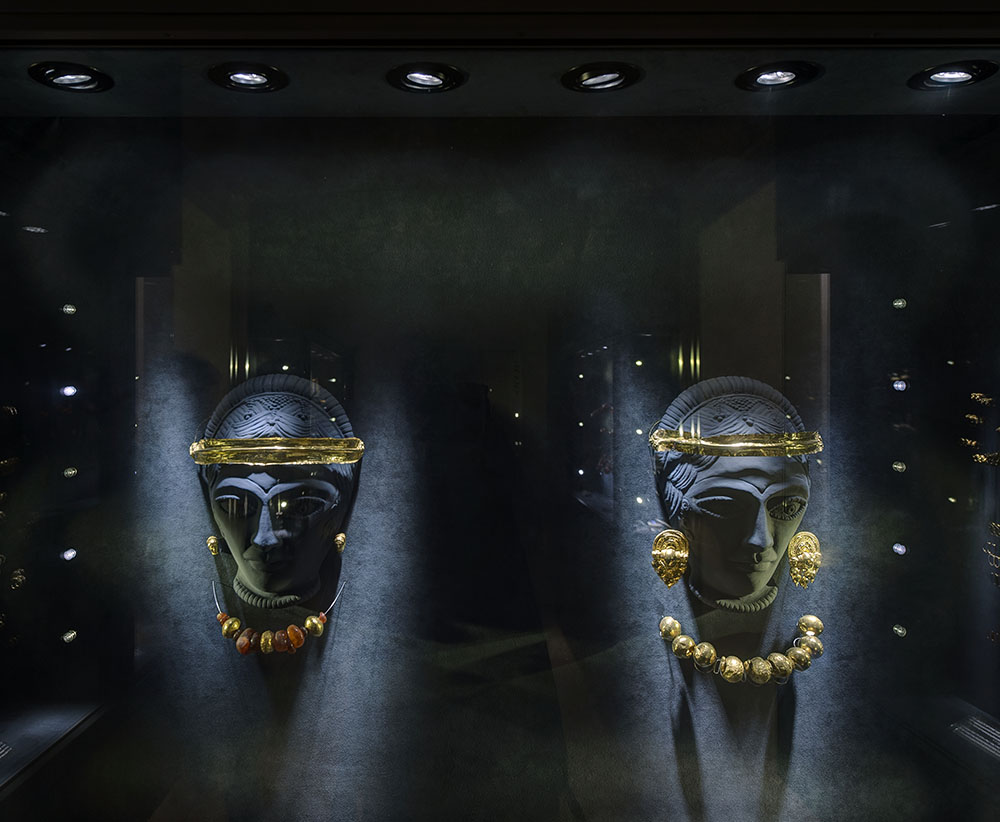 Situated near the Po River Delta, Ferrara has still today the unique aspect that the Este gave it during three centuries of government, until 1598, transforming it from a Medieval centre in a real Renaissance ideal city.

Its urban structure, defined “Herculean Addition” by the project of Ercole I d’Este, who conceived longitudinal and intersections streets instead of the usual Roman plan, make it the first modern city in Europe. Because of this feature, Ferrara has been recognized a World Heritage Site by UNESCO in 1995. 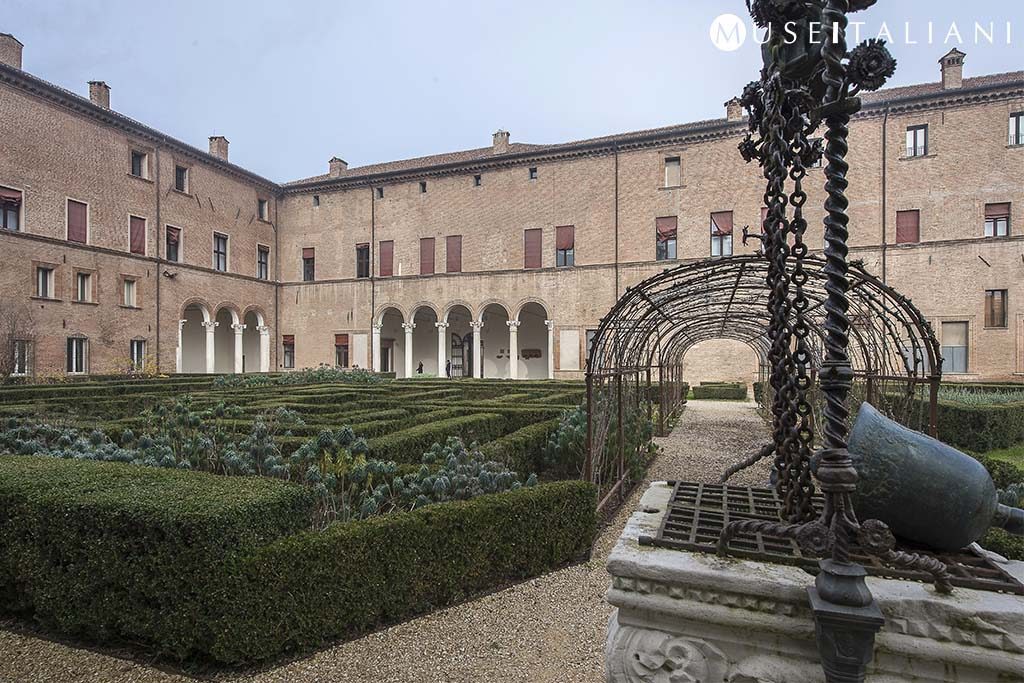 Jewel of the XVI century, the building was designed by Biagio Rossetti on behalf of Antonio Costabili, Ambassador for the Este in Milan. By tradition it is linked to the name of Ludovico il Moro, who was said to have built the residence to ensure himself a safe exile in the hometown of his wife, Beatrice d’Este.

The cornerstone of the palace is the courtyard, completed only on two sides and adorned with a double lodge decorated with columns and white stone reliefs inspired by classical antiquity. In the porch in front of the garden – recently restored in Renaissance style – the “Treasure Hall” (Sala del Tesoro) is home to an extraordinary cycle of frescoes by Benvenuto Tisi, called Garofalo, dating from the early sixteenth century. 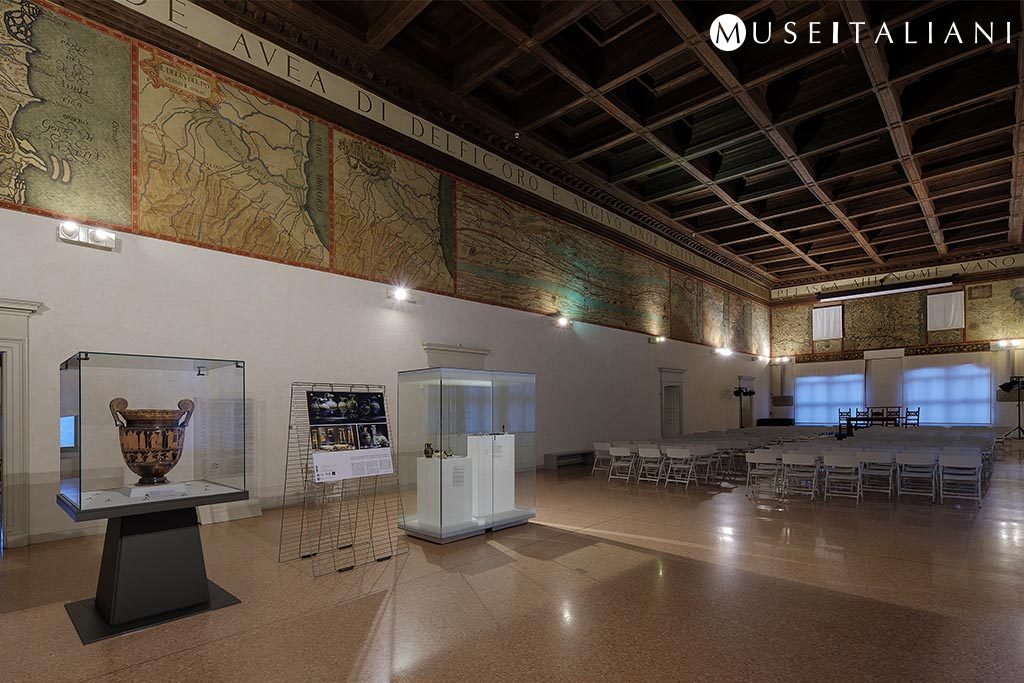 Renaissance art and architecture coexist with the remains of the ancient city of Spina in the halls of the Archaeological Museum. Inside, the rich findings of the necropolis: pottery, vases and ornaments in bronze, gold, silver, amber and glass paste jewelry, from the Hellenic and the Etruscan period, resurfaced since 1922 on reclamation public works of the Valleys of Comacchio.

The representation on maps of the territory where flourished the ancient port city, decorates the walls of the “Hall of Maps” (Salone delle Carte Geografiche), painted when Palazzo Costabili was transformed into Archaeological Museum, which occurred in 1935 in the middle of the fascist period. The aim is to introduce the visitor to the discovery of the evolution of the Po Delta, the ancient river Eridanos with its constant changes of course that marked the luck and the decline of Spina in ancient times and of Ferrara from the Middle Ages. 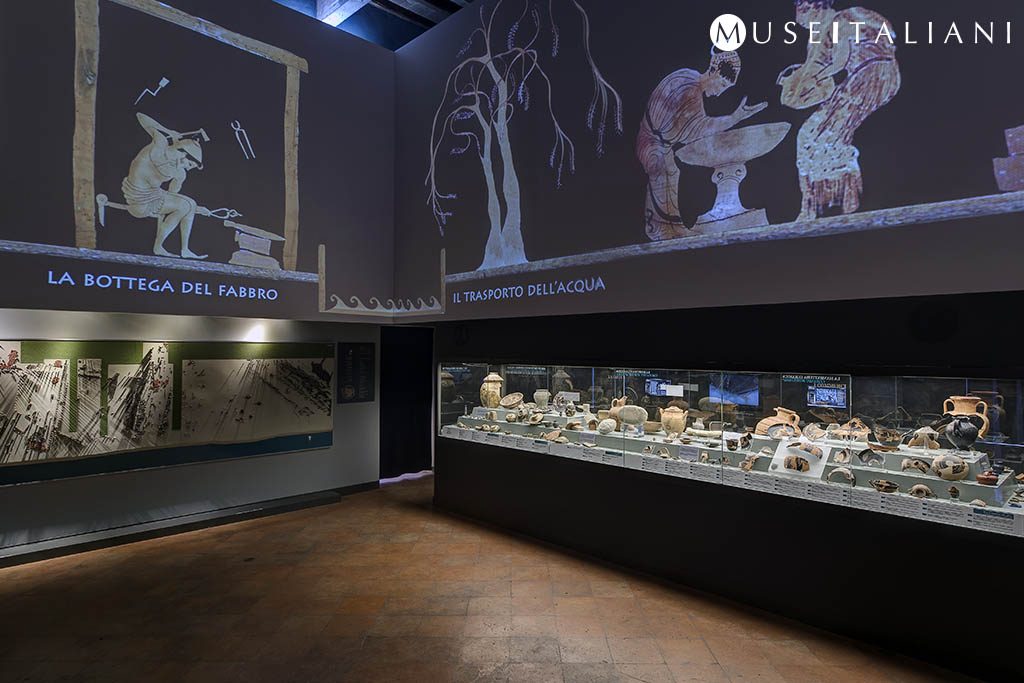 Evidence of a wealth arising from the flourishing trade between Spina and the Mediterranean ports, the “Hall of Golds” (Sala degli ori) is set up like a real jewellery, thanks to a partnership with Bulgari, and collects a wide exhibition of jewelry, amber and glass paste ointment bottles, which highlight the richness of local Etruscan aristocracies between the sixth and the fourth centuries BC. 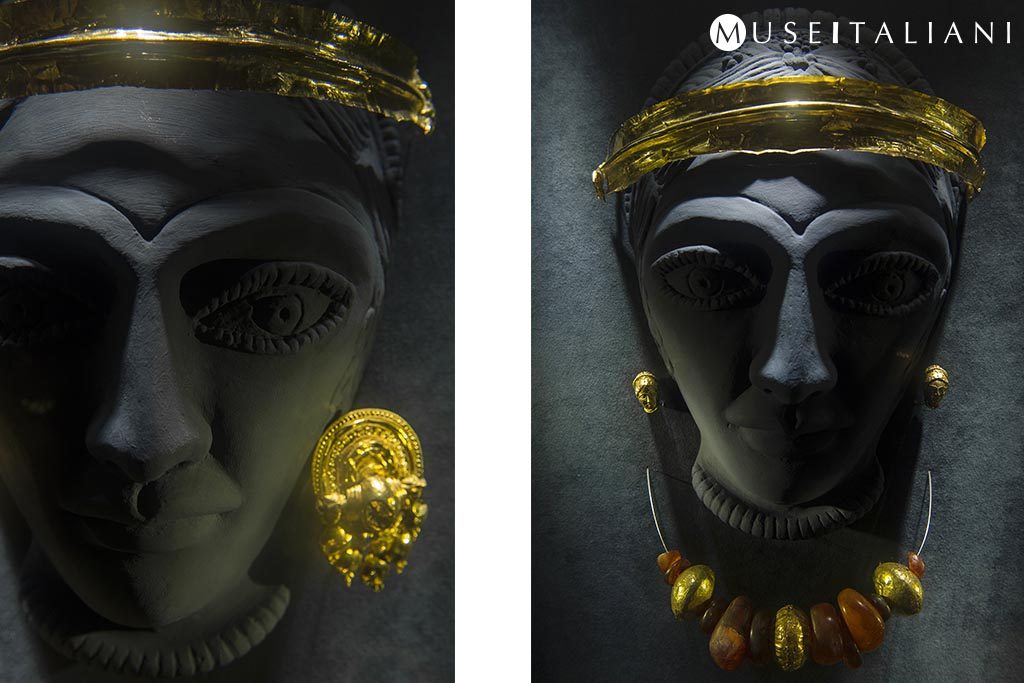 The ability of Etruscan artisans is well represented also by the beautiful amber jewels, often collected in rich necklaces with alternations of glass paste and gold. The link with the amber and its origins evokes the legend of Phaeton, the son of Sun-God fallen in River Eridanos waters after a mad flight at the helm of his father’s chariot. His sisters, the Heliades, wept copious tears that became amber. 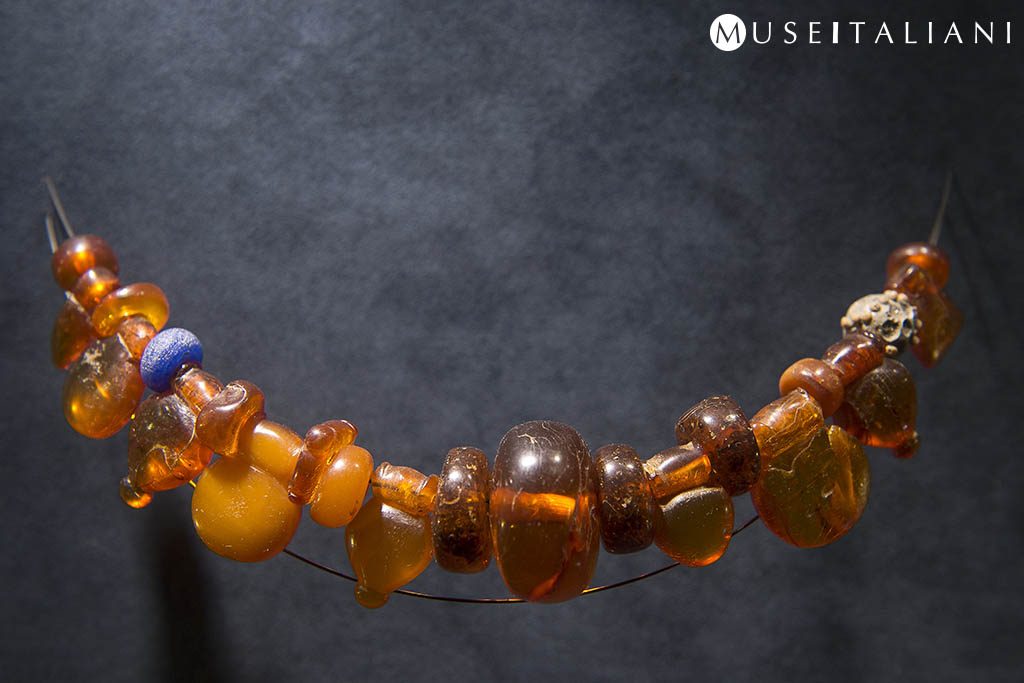 Among the imported Greek pottery particularly appreciated by the Spina’s inhabitants, the fish plates stand out. They are decorated with detailed depictions of the meals that they could “hold”. We find all the protagonists of the 2.500 years ago fish market, redfish, mullet, bream, monkfish, rays, cuttlefish and squid, but not the eel even if it was regularly consumed during banquets. 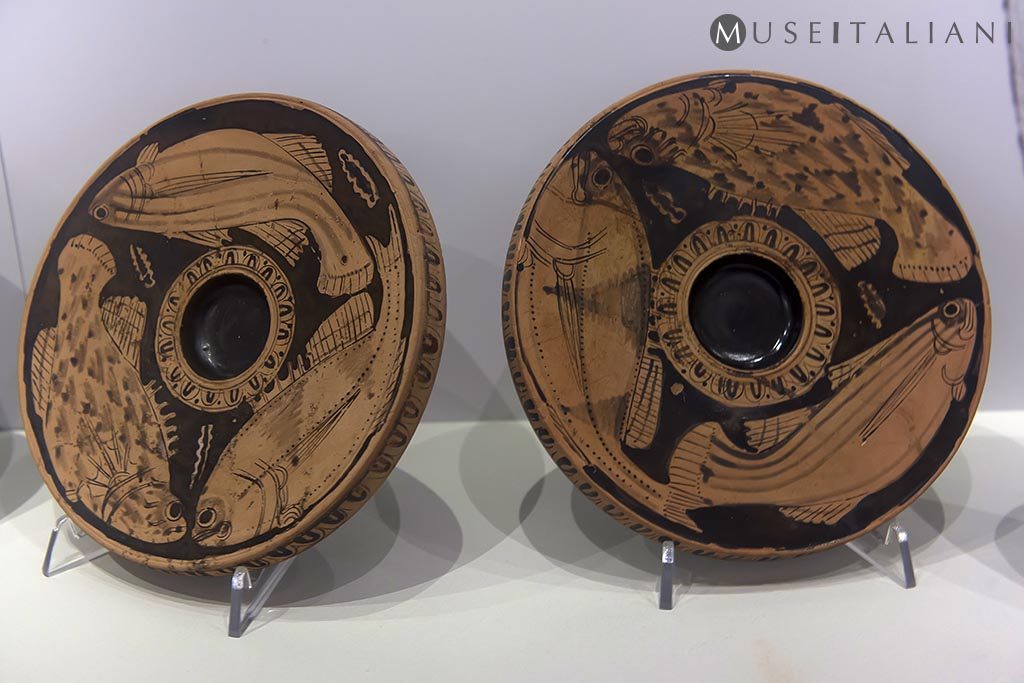 The typical shape of the fish plate, characterized by a central hollow, suggests that it should serve to contain sauces or condiments for the precious fish, certainly one of the most popular foods in a river and sea emporium as Spina was. 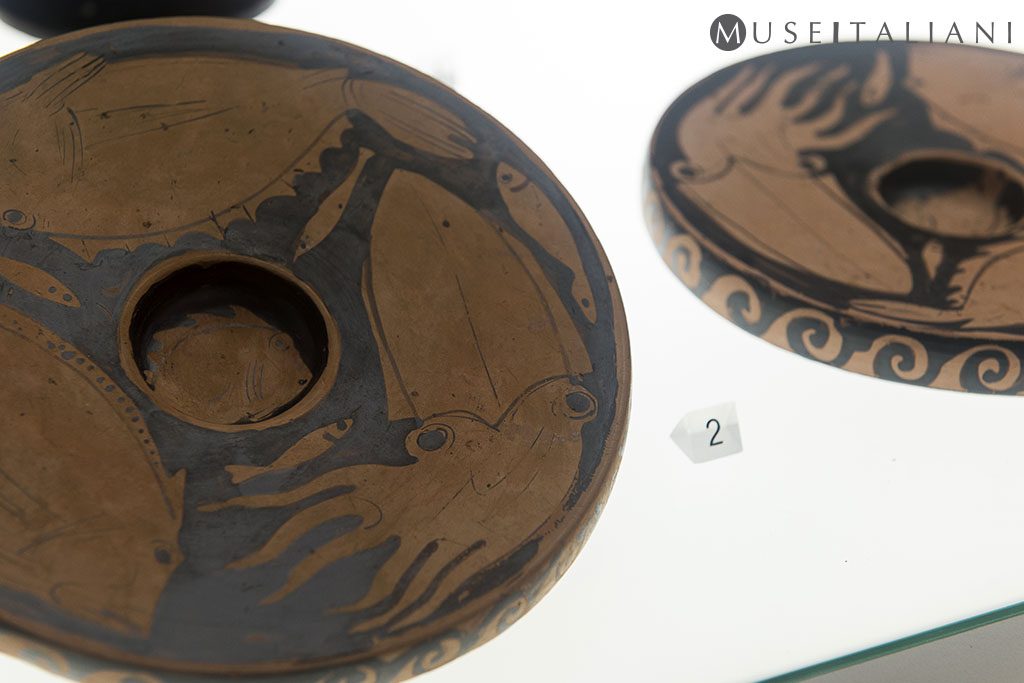 The Etruscans at the table

Although until today only modest written documents able to witness the Etruscans thought and literature survived, archaeology and other sources at our disposal make certain that Spina inhabitants have been influenced by the customs of Greek society, with which they traded and coexisted.

The Greek sources – through the surviving fragments and the works of Aristophanes, Archestratus, Diphilus – list the types of fish exposed on the market stalls or in specific places (opsopolia), they explain the various fishing techniques and describe the menus and the preparation of the recipes. It is not surprising to discover in the verses of the poet Philoxenus that even in ancient times boiled fish was good, but the cooked and fried ones were a lot more.

Located in the building designed by Biagio Rossetti for Antonio Costabili, the museum preserves the finds from the necropolis and the town of Spina, the thriving Etruscan commercial port, one of the focal points of the region between the sixth and third centuries B.C. The exhibition contains some of the grave furniture found in the four thousand tombs of the necropolis, among which a large collection of Attic pottery, in particular red-figured vases of the fifth century B.C. On the ground floor is the "Sala del Tesoro" (Treasure Hall) which displays one of the most beautiful frescoes painted by Garofalo at the beginning of the 14th century, as well as the "Sala delle Piroghe" the Hall of Pirogues, with boats of the late Roman period (3rd-4th century AD); other rooms display the finds from the town of Spina and items regarding religion and the different languages spoken in this multi-cultural centre of the ancient world. The The first floor is dedicated to the necropolis of the city and includes masterpieces of painted Attic vases, Etruscan bronzes and precious objects imported from all over the Mediterranean; here is also the "Sala degli Ori" (Room of Gold) with its collection of gold jewelry, silver, amber and glass paste, dating from the fifth and fourth centuries BC. Palazzo Costabili detto "di Ludovico il Moro"Even though it bears the name of Ludovico Maria Sforza, called Il Moro, duke of Milan from 1494-1499, the Palazzo was actually commissioned by Antonio Costabili, an important nobleman of the court of duke Ercole I d'Este, secretary and Ambassador for the Este in Milan. The building was projected by Biagio Rossetti , the most distinguished ferrarese architect of the Renaissance, to whom the duke Ercole in 1492 entrusted the grand plan of urbanistic reorganization of the city, the so called "Herculean Addition“.The palace rose on the ancient Via della Ghiara, named for the gravel deposited by an ancient branch of the river Po that used to flow here.The construction of the building, according to local historians, was suggested by Ludovico il Moro himself, who wanted to have a safe exile, in case he was to lose his duchy. It is also a testimony of historical and political alliances between the two cities, Ferrara and Milano, already strengthened by matrimonial bonds-Lodovico was married to Beatrice, the daughter of Ercole I, and was the uncle of Anna Sforza, married with Alfonso d'Este.Central point of the palace is the Courtyard of Honour, completed only on two sides and adorned with a double lodge with sculptural decorations in white stone. This work was probably executed by Gabriele Frisoni, to whom the marble monumental staircase that leads the visitor to the noble floor is also attributed.