You are in: Home / Museums / Campania 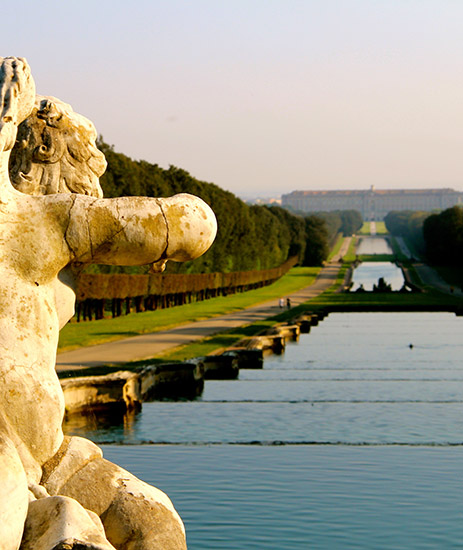 The Royal Park, an integral part of the project presented by the architect Louis Vanvitelli to the sovereigns, is inspired by the gardens of the great European residents of the eighteenth century, merging the Italian tradition of the Renaissance garden with the solutions introduced by André Le Nôtre in Versailles. The works, with the delimitation of the area and the planting of the first plants, began in 1753, at the same time as those for the construction of the Caroline Aqueduct, whose waters from the slopes of Mount Taburno would have fed the fountains of the royal gardens. The present Park is only in part the realization of the project of Louis Vanvitelli. The work was completed by his son Carlo, who reduced the paternal design due to a lack of funds.

The structure is divided into three parts. The first, just behind the Palace, is destined for the parterre (a lawn with straight avenues) and includes the so-called Bosco vecchio (old Wood, because it pre-existed the Palace) in which the Castelluccia stands, a sixteenth-century building, rebuilt in 1769, as a miniature fortress in which the young Ferdinand IV practiced in mock battles. The avenues reach Peschiera, an artificial lake with a small island in the center, embellished with a circular temple.

The second part of the Park, characterized by the water shows that gush out from the fountains, arranged in axis with the Palace, starts from the fountain of "Margherita" (Fontana Margherita): two side ramps ascend to the Bridge of Ercole, where the great "avenue of water" begins. Following the slope of the hill, water basins, ornamented with statues, alternate with canals at different levels; two wide avenues, bordered by espaliers of holm-oak trees and oak groves, flank it until the great basin, in which an imposing cascade of water falls from the slopes of Monte Briano. The first fountain along this route is the one known as the fountain of the “Dolphins" (Fontana dei Delfini) because the water comes out of the mouths of three big stone fish. Then there is the unfinished fountain of "Aeolus" (Fontana di Eolo), a large exedra in which numerous "caverns" simulate the abode of the winds, represented by numerous statues of zephyrs. Afterwards seven sloping basins form as many waterfalls and the route reaches the fountain of "Ceres" (Fontana di Cerere), symbol of Sicily's fertility, with the statues of the goddess and of the two rivers of the island. The last fountain depicts the story of "Venus and Adonis" (Fontana di Venere e Adone). In the basin below the waterfall of Mount Briano, called "the Bath of Diana" (Fontana di Diana e Atteone) two important marble groups depict Actaeon when, turned into a stag by Diana, is going to be eaten by his own hounds and Diana, surrounded by nymphs, is surprised while leaving from her bath.

The third part is the English Garden, wanted by Maria Carolina. Lord Hamilton persuaded the Queen to compete with her sister Marie Antoinette of France in order to overshadow the Petit Trianon at Versailles. The English Garden was realized by the English botanist Andrew Graefer, who in 1782, started the work in the area near the Grand Cascade, where the sloping land towards the South lends itself to fanciful compositions and to the cultivation of exotic species. The garden offers a series of suggestive places with strong references to the models of the time: the Cryptoporticus, with the statues coming from the excavations of Pompeii and from the Farnese collection; the small pond in the Bath of Venus, with the false Pompeian ruins; the English Mansion, home of the gardener Graefer, built on two floors, with a base and Doric pillars supporting a cornice decorated with medallions, and, lastly, the Aperìa, an area used as a water tank by Vanvitelli , then used for the breeding of bees and finally transformed into a greenhouse in 1826. Nearby, there are four greenhouses in which Graefer planted the plants he was looking for in Capri, in the Salentino area or in Palermo. Close to them are the Aquarium, intended for aquatic plants, the Rose Garden and the Botanic School.